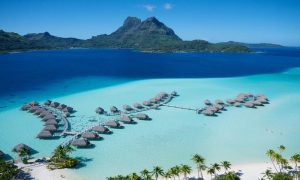 Dreamoverwater.com is a hand picked collection of the world’s finest overwater bungalow resorts, updated by our team on a yearly basis.

THE HISTORY OF OVERWATER BUNGALOWS:

Though the overwater bungalow borrows heavily from traditional architecture styles of South Asia and the South Pacific, its potential as luxury tourist accommodation wasn’t fully realized until 1967.

That was the year when three American residents of French Polynesia, Jay Carlisle, Donald ‘Muk’ McCallum and Hugh Kelley, wanted to expand their small hotel business on the island of Ra’iātea, near Tahiti. Though the waters surrounding the island were beautiful it didn’t have any beaches and so, to attract tourists, some thinking outside the box would be required.

A seemingly crazy idea came to them; put hotel rooms, using stilts, directly over the water. This would seem, and in effect just be, impossible in most parts of the world but the island, and indeed much of the South Pacific, was blessed with many sheltered lagoons and atolls where the waters were calm enough and kind enough to allow such a thing.

Thus the idea was born and the world’s very first overwater bungalows were built in Ra’iātea, Tahiti in 1967. Since then, and especially in the last couple of decades, the concept has spread all around the tropics. Tahiti and French Polynesia still have many, especially Bora Bora, but these days the world capital is The Maldives which boasts dozens of luxury overwater resorts. They are also though to be found in other parts of Asia, the Caribbean and in some parts of Africa.

WHY ARE OVERWATER BUNGALOWS SO POPULAR?

Overwater bungalows have come to almost define luxury accommodation in exotic seaside locations, especially for honeymoons and romantic getaways. They have prices to match though and can be now seen, relatively speaking, as some of the world’s most expensive per square meter accommodation. Despite this, or maybe because of this, their popularity continues to grow exponentially.

The reason is that no other type of hotel room or suite can give the same sense of romance, of peace, and of almost being at one with the sea. Fresh salty breezes waft through and soothing shallow waves pass undisturbed beneath your feet. Sea life goes about its business below you too, and you can wade gently in among it all yourself at a moment’s notice, as if it were the most natural thing in the world.

There are more practical reasons too though – supply and demand. The demand is there but the supply is lacking. As briefly mentioned above, overwater bungalows are specialist structures that need certain conditions to be viable, i.e. shallow, sheltered, consistently very calm sea bays or lagoons, the type of conditions that are relatively rare except in certain fortunate regions of the world like the Maldives or French Polynesia.

There are around 200 overwater bungalow resorts in the world and the aim of Dreamoverwater.com is to document and review only the best of them. One of the criteria in which a resort can fail to be included is if it appears to not grant sufficient respect to its marine environment.

Many resorts are side by side with delicate coral reefs, something which instinctively seems like a negative, but we see that, just like safari tourism in Africa depends on protecting the animals that people come to see, the vast majority of overwater resorts view the coral reefs as something of great value, and as something which they cherish and protect. Any resorts that we find do not share these principles will, as mentioned, be excluded from our collection.

For further information about DreamOverWater.com, or about overwater bungalows in general, feel free to contact us at info -at- dreamoverwater.com and we will get back to you promptly.

Any great overwater bungalow resorts out there that we haven’t featured but that you think we should investigate? Drop us a line: info -at- dreamoverwater.com.