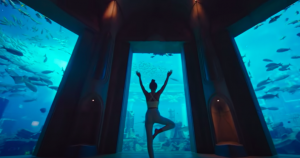 Under the waves in Dubai…

Though Dubai has two underwater hotel restaurants only one hotel has under water rooms, and that is the city’s second largest, the very busy, very lively Atlantis The Palm Dubai.

It has over 1500 rooms and a great amount of entertainment facilities for both adults and children including a huge water park, an aquarium & ‘underwater zoo’, and one of the city’s two aforementioned underwater restaurants.

The equally prestigious Burj Al Arab Hotel is home to the other underwater restaurant (well, it’s not quite under-water, but close enough), the Al Mahara.

Continue reading for details of both these fantastic hotels… 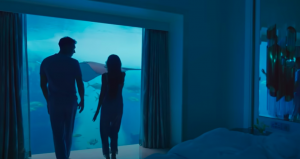 This magnificent 5 Star, perhaps the UAE’s most impressive, dominates the famous Palm Jumeirah.

It is an enormous complex with a huge aquarium and ‘underwater zoo’, a multiple Michelin starred underwater restaurant, a Gordon Ramsey restaurant, tennis courts, bowling alleys and the Middle East’s largest water park to name just a few of its myriad facilities.

It also has an enormous choice of high end accommodation but it really pulls out all the stops with its extremely opulent suites, including of course its two under water suites. 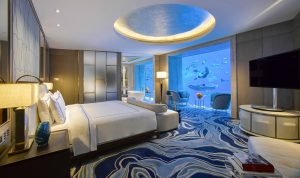 These two identical suites – The Poseidon and The Neptune – are 165 square meter, three floor residences entered via a private elevator on the third floor.

From where you descend the spiral staircase to the main lounge & dining area (a fully equipped kitchen is also present) overlooking the waters of the lagoon then descend further to the bedroom quarters deep beneath the water.

Glass walls dominate the bedroom, and the gold plated, en suite bathroom, and whether from the bed or the marble bathtub an incredible array of sea life – sharks, sting rays and all manner of exotic fish – float gracefully past. 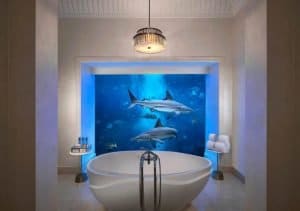 The lagoon is home to a staggering, roughly 65,000 creatures, and the visual effect is really quite stunning – hypnotic – otherworldly.

The suites come with a 24-hour private butler service, in-room check-in and perks such as complimentary massages & personal training services, free use of the ShuiQi Spa facilities, free access to the Imperial Club, the Lost Chambers Aquarium and the Aquaventure Waterpark, a private cabana at the beach, pool and waterpark, complimentary airport transfers and more.

Atlantis The Palm Dubai – The Hotel in General: 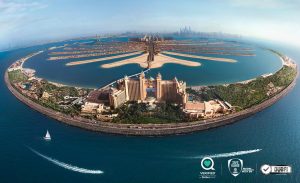 As you may have guessed from the name, the theme of the hotel is the sea. It has a very impressive aquarium and underwater zoo, a large and fun water park – the largest in the Middle East in fact, and a long, private sand beach.

It is one of Dubai’s most prestigious 5 star hotels with a wealth of upscale boutiques, Michelin starred restaurants and bars, including Gordon Ramsey’s Bread Street Kitchen and Ossiano underwater restaurant, and a busy nightclub.

It has a huge range of accommodation too with prices ranging from a few hundred dollars per night to over ten thousand.

Many of its rooms are enormously impressive – check out the 924 square meter ‘Royal Bridge Suite’ for example, just to give yourself an idea.

As mentioned above the underwater suites can get booked up pretty quickly but if so there is still plenty of opportunity to experience similar even if for a shorter time – the aquarium has walkways under the water where you can gaze up and around at the sea life, and the waterpark has a huge water slide, called the ‘Leap of Faith’, which goes through an under water tunnel section where sharks swim above you.

It’s a very lively hotel which manages to be strike a balance between being a resort for families and one for the childless. The atmosphere during the day is more family orientated with the main attractions being the waterpark and the aquarium of course but also the highly praised Kid’s Club.

At night the adults take over the bars and clubs, including the very popular, by day and night, beach club, Nasimi, where you’ll find a mixture of hotel guests and well heeled Dubai residents, and restaurants including the glass walled underwater restaurant & bar Ossiano. To escape the kids during the day adults can also enjoy the serenity of the resort’s spa and there are adults only dining options too.

How Do I Get To Atlantis The Palm Dubai?

Atlantis The Palm Dubai covers a substantial area of the sea facing, outer crescent of Palm Jumeirah, the city’s unique man made islands. The resort is just over a half an hour by car/taxi from Dubai International Airport.

Arriving by public transport involves taking the red metro line to Dubai Marina, around a 45 minute journey, then changing on to one of the numerous trams from the marina to Palm Jumeirah. From there you’ll take the short walk to the scenic Palm Monorail which will bring you to the resort in a few minutes.

Reviews of Atlantis The Palm:

“You HAVE to stay here at least 3 nights – This has to be one of the most exciting hotels in Dubai! So many activities, restaurants and bars inside. Loved the waterpark, aquarium and beaches. The included breakfast and dinner restaurant was TOP!….”

“Everything was amazing, from the moment you enter the lobby you feel like you are in a world apart. The water park is really fun; you can spend a whole day there. Beaches are pristine. Breakfast at Saffron is almost overwhelming (in a positive way) with all the different choices, all of the highest quality, from healthy to chocolate-fountain indulgent. Even the room service was top notch, with pizza brought in an oven and beer in a bucket of ice. Amazing resort!…..”

>> GO HERE TO READ MORE REVIEWS & TO BOOK YOUR STAY AT ATLANTIS THE PALM DUBAI: 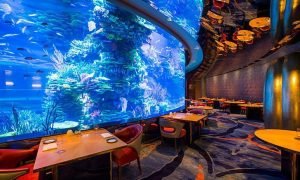 So Dubai has only one hotel with underwater rooms but if they are booked, as they, Covid notwithstanding, tend to be, you can still get something of a similar experience dining at an underwater hotel restaurant.

Dubai has two – the first is the above mentioned Ossiano at Atlantis The Palm and the second Al Mahara at the, equally over the top luxury, Burj Al Arab Hotel.

The latter it should be explained is not technically under water – it sits around an enormous aquarium with which it shares floor to ceiling glass walls.

The effect though is very similar, and if you can arrange a table by the glass you can indeed almost feel you are under the sea.

Ossiano, on the other hand, is completely underwater and is a much smaller and more intimate venue. Many will prefer it for those reasons but the big and bold Al Mahara is also as impressive a restaurant venue as you will find anywhere.

Their unique interiors give both a head start in lists of Dubai’s best dining spots but they are also very highly rated restaurants in their own right, and both have the Michelin stars to prove it.

Other Underwater Hotels Around the World: